You are here:
Truckers life 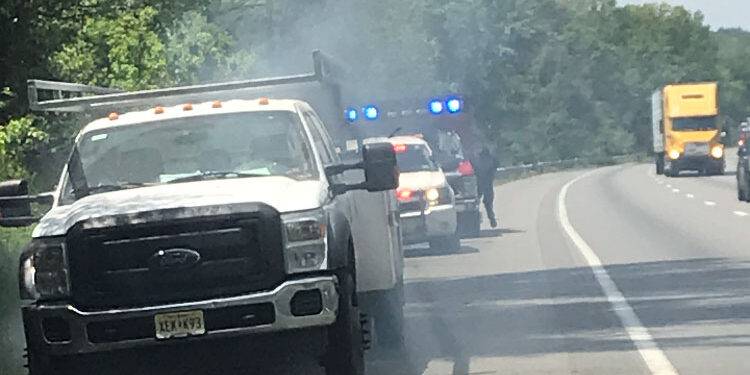 The story started with getting an email on May, 17. The text was short but impressive!

We needed to know all the details straight from the horse’s mouth! We called our truck driver Tony and asked him to come to the office in Chicago. We wanted to thank him for his courage and quick thinking. This case was definitely noteworthy.

Nelson Bonilla was really lucky to have Tony passing by this day. Tony was not supposed to be there.

“It was last Monday. On Sunday Dima, my dispatcher gave me a load, but then there were some changes. So, on Monday, he gave me a different load. I was traveling on I-78 going to New Jersey. I was on the right hand side when I noticed a truck that was on fire. The back of the truck was on fire and the flame was about a meter high.”

Tony didn’t have to think twice, he saw a fellow driver with a problem, and he acted immediately.

“I saw the truck and I saw the driver, holding his head very worried. I saw that nobody was trying to help.”

He needed to act very quickly. Tony pulled up his truck in front of the truck on fire, keeping a safe distance as the truck could explode any second! He took a fire extinguisher from his truck and ran to the burning truck.

“I started hitting that fire with a fire extinguisher and then I told him “Hey, keep on doing it!”. I remembered that I have three gallons of water in my truck, because I jog every morning and take a shower behind my truck after that.”

That water had done its part of the job. All the action together worked out for good.

“While the other driver was hitting the fire with a fire extinguisher, I was able to go to my truck and bring the 3 gallons of water that I had. Then the police and the firefighters arrived at the scene.”

Thinking about the situation and what could have happened, it looks like Tony was a highway angel for Nelson. Nelson was lucky enough to meet the right person at the right moment when he needed his help. So many other cars just passed by, but Tony knew he had to help.

“It’s one of those situations when you don’t think too much, you just react. When something happens you just react properly. Some people just don’t care, they pass by and put it on Facebook. Some people don’t realize the situation is critical and some people are afraid of getting close. Everybody reacts in a different way. I just act. It is in my nature.”

When there was no danger for the truck anymore, Tony and Nelson were talking about drivers, their companies and their public images. Tony said:

“You know what, I’m thinking about the company and about all drivers. We are on the road. When we make mistakes, everybody calls the company “Hey, your driver from Brite, he’s not good, he made a mistake” but when we do something right nobody notices.”

Nelson asked Tony what he could do for him. Tony replied that if he is thankful from the heart, he would ask him to call the company.

“So if you really want to make a difference, call my company and tell them what I just did. It would make a difference not just in my career but the company. A profile. Because, let’s say, if I’m on the road and I kill somebody, or I run into somebody, or I hurt somebody, they don’t think about Tony, they look at Brite. Understand? Not one person.”

Tony gave the driver Brite Logistics safety manager’s email address where we got that thankful email there. We are so proud to work with such drivers as Tony Nunez who are ready to help others on the road. Moreover, he knows how to do it effectively.

Tony Nunez has been working with Brite Logistics for 3 years.

“I worked for Sam’s Club (owned and operated by Walmart Inc.). Walmart is one of the best in the industry if not the best, according to everybody. I had gotten a job offer to become a driver with Walmart.

We have to realize that it is about what we do with what the company gives us. Brite just raised the pay, they have great equipment, dispatchers. I have been working with my dispatcher for almost 3 years, and never had any problems.

He is on the board all the time. I always get a load. This company has a lot of great things.

Photo: Tony Nunez with “Driver of the month” award and his dispatcher Dima

As a driver it is in your best interest to be respectful, to be safe, to be friendly with people.

I worked with two companies before. Over a Brite, we have what is called an open-door policy, when you can talk to anybody anytime. All this makes a big difference. The way you treat people, the way you treat your employees, the way you make them feel.

I am here because I chose to be here. Why did I choose to be here? Because Brite treats me with decency and respect. And gives me what I need, which is great equipment, and great communication with my dispatcher. We’ve got good guys here. I’ve got to know everybody, safety, accounting, my dispatcher, and the operations manager, Matt.

I am very thankful for this company. I’ve been driving for years and Brite has been a great company for me.

You know, I’m happy! I’m very happy with this company.”